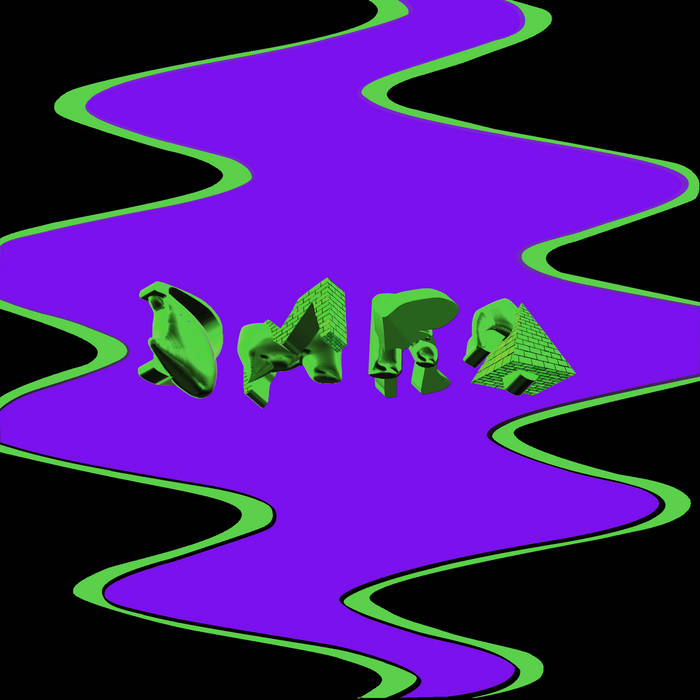 For his second escapade under the Danse Musique Rhône Alpes banner, Loup Gangloff, half of Deux Boules
Vanille, digs in solo the furrow of an artisanal dance music made largely from percussions and electronic
treatments.
From 2011, Gangloff reconciles his past as a visual artist with his ambitions as a musician, and launches himself
and Frédéric Mancini into the elaboration of drums connected to home-made analogue synthesizers allowing to
introduce melodies, textures, randomness and errors to the metronomic polyrhythm generated by four hands. Nine
years later, the duo Deux Boules Vanille continues the torrid tribal-noise performances without ever losing sight
of the desire for research, interaction and experimentation that is at the heart of the project and the raison d’être
of its technicality. It is certainly this permanent need for exploration that has recently led Gangloff to reactivate
Danse Musique Rhône Alpes, his solo project, and to continue the experimentation of «Alerte à Walibi», a cassette
released in 2016 on the german label MMODEMM.
The Danse Musique Rhône Alpes avatar is a nostalgic tribute to the commercial dance of the 90s but also to the
most raw and radical forms of electronic music. A will of Gangloff to salute the regressive immediacy of plastic
melodies, silly and addictive while shouting his love of direct and physical rhythmic de/constructions. The amused
promise to venerate the codes of dance as much as its evil detractors and to make D.M.R.A borrow from the most
oblique trajectories of Chicago house as much as the least practicable ruts of lo-fi techno, and thus to join in the
line of these electronic music of collective trance which succeeded in melting the archetypes of the popular club to
noisy experiments, offering its most cathartic hours to social dance.
It is thus armed with a singular instrumentarium that D.M.R.A invokes the spirits of these precocious club clichés,
and its most radical counter-feet, to resurrect their absurdity, urgency and physicality in raw compositions -
between false traditional music and «techno povera» - which seem to respond to a precise rite both in the
performance and the recording.
DIY enthusiast, the percussionist has built up a wide range of instruments - from bass toms to marimba, clay pots,
wooden cleats and various prepared drum elements - from which he creates rhythmic structures with infinitely
contrasting sound textures that he supports with electronic patterns generated by synthesizers and a groovebox.
Gangloff uses magnetic tape to fix the result of his sound constructions, which gives them a particular grain and
accentuates their raw character; but the cassette four-track is also an instrument in its own right in the compositions
since it allows the pitch and dynamics of the captured sounds to be played by modulating the speed of the tape
scrolling.
This mode of operation refines the sound identity of Danse Musique Rhône Alpes and gives this second album a
most singular aesthetic positioning.
Shit Forest is declined in ten tracks and as many titles, with a slightly hip symbolic, potentially inspired by an
adventure novel or a spiritism seance doubled by a DIY tutorial between 8-bit electro based on natural rubber,
mental acid sharpened with a penknife and pulsating concrete music.
Beyond the intentions and the amused concept, Danse Musique Rhône Alpes is unashamedly moving between
the furious and twisted electro of the anglo-german Errorsmith, the raucous industrial artillery of the american
Container and the techno povera of the Lisbon-based label Principe and shows an amazing maturity.
Take a walk and get lost in Shit Forest, the Wolf is there.

With D.M.R.A - Loup Gangloff digs in solo the furrow of an artisanal techno-ish music, made again for
the most part with percussions and electronic treatments.
D.M.R.A. invokes the spirits of old club clichés, and its most radical counterpoints, to resurrect
its absurdity, urgency and physicality in raw compositions. Between fake traditional music,
techno povera and overdosed ambient. ... more

Bandcamp Daily  your guide to the world of Bandcamp

Featuring appearances from Kari Faux, Bluestaeb and and interview with NY-bred artist Wiki